“This human trafficking victim was allegedly groomed for sexual exploitation through the use of social media by Saint Matthew Hopson. Despite his name, we are alleging that Hopson’s actions and activities indicate that he is not a saint but an exploiter of the naivete of our young for his personal profit,” said State Attorney Katherine Fernandez Rundle. “The dangerous misuse of social media cannot be overstated. All parents need to be familiar with these dangers before something terrible or unfortunate occurs to their loved ones.”

Following communications with the City of Lakeland Florida Police Department, an investigation undertaken by the Miami-Dade State Attorney’s Office Human Trafficking Task Force revealed that the eighteen (18) year-old victim allegedly met thirty-two (32) year-old Saint Matthew Hopson via a dating social media platform,(Facebook Dating), on Thursday, January 14, 2021. Hopson allegedly began grooming the victim by making her believe he was interested in having a romantic relationship with her. On or about the following day, Hopson drove to Lakeland, Florida, to meet the victim and drove her to Miami. Once in Miami, he transported the victim to the Comfort Inn & Suites Hotel in Miami Springs. Hopson allegedly told the victim he managed an escort service and introduced her to Atilia Cleto Thomas.

Hopson then allegedly took the victim shopping to Victoria’s Secret and later had her pose for cell phone pictures in the garments he purchased for her. Without her knowledge or consent, Hopson sent the photographs to Thomas and instructed her to post the victim’s photographs to an online escort service platform named “skipthegames.com”. Thomas allegedly posted the victim’s photographs under the title “I’m new to the game.” The victim had no knowledge she was being offered for sex on-line. Hopson allegedly told the victim that Thomas would be the one having sex with the male clients. Later, Thomas told the victim that she would have to have sex with the customer “or we will lose $600.00”. After some back and forth, the victim attempted to comply with Thomas’ demands but was unable to fulfill the requests. Thomas ended up performing the sexual act on the buyer and the $300 payment was allegedly taken by Thomas and given, in full, to Hopson. On January 16, 2021, while at the hotel, Hopson had several instances of sexual contact with the victim against her will. The victim told Hopson she did not want to engage in prostitution and wanted to go home. Hopson then allegedly told the victim he had just gotten out of prison for human trafficking and kidnapping and he would kill her if she called police. Hopson then demanded that the victim provide him with the address of one of her family members as potential leverage against the victim calling the police. Hopson and Thomas then drove the victim back to Lakeland, dropping her off at a church and eventual reunification with a family member. The Lakeland Police Department was also contacted. On February 10, 2021, an investigator from the Miami-Dade State Attorney’s Office Human Trafficking Task Force traveled to Lakeland and took a recorded sworn statement from the victim. The victim was able to positively identify Hopson and Thomas’ photographs. On February 12, 2021, while attempting to retrieve video footage and records from the Comfort Inn & Suites Miami International Airport Hotel in Miami Springs, a clerk recognized the name and said that Hopson had just departed the hotel after not being able to pay for the room.

A “BOLO” (Be On The Look-Out) notice was issued for Hopson, Thomas and their car. The Miami Springs Police Department Crime Suppression Unit officers located the vehicle and Hopson and Thomas were detained. Thomas, the registered owner of the vehicle, signed a consent to search her vehicle. The search revealed a notebook that Thomas indicated belonged to Hopson, containing a hand-written list of laws about being a “pimp”. A criminal history check for Saint Matthew Hopson revealed a lengthy history of prostitution-related arrests in multiple states and charges for kidnapping. Hopson appears to have recently been released from prison and he indicated that he is currently on probation in North Carolina. Prosecutors are currently reviewing all the evidence that was collected and which corroborated the victim’s accounts. Formal charges are set to be filed later this month. 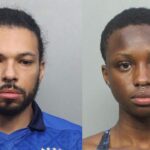 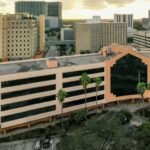