They made the announcement along with members of the City of Miami and Miami-Dade County police departments at an event highlighting the arrest of three people accused of forging documents to steal and fraudulently sell a Coconut Grove property to New York developers.

NBC 6 Investigators for months reported on the increase in real-estate crimes targeting vacant lots including 50 similar cases cited by Miami police. Florida is the second worst state for elderly fraud according to an FBI database.

“This community, we need to embrace this problem. And we need to tackle it. Without a doubt, those who exploit and prey on our elderly residents have a cold, cold, heart,” Miami-Dade State Attorney Katherine Fernandez Rundle said.

The coronavirus pandemic has led to many real-estate businesses to be conducted remotely or online. The president of the title company overseeing the Coconut Grove said criminals have taken advantage of that situation.

The victim of the scheme Shirley Gibson and her attorney David Winker spoke at the Friday press conference.

Fernandez Rundle and Levine Cava hope to work with the county clerk of courts, law enforcement, and the property appraiser to form the task force. Mayor Levine Cava wants the task force to include legal services for victims who cannot afford lawyers on their own.

Miami police officers on the felony apprehension task force worked with US marshals to make the arrests Wednesday. Police claim the trio forged the deed, the notary stamp, and sold it to Ollie Development Group in New York for $230,000. Gibson’s lawyer says the title company overseeing the deal is also a victim in the case and has been very cooperative.

Information on the accused attorneys were not yet available Friday and are innocent until proven guilty.

Vacant lots are vulnerable because the owner often does not have a mortgage on the property so there are less hoops to jump through to fraudulently transfer the property.

“We also know that a lot more needs to be done because it involves illegally recording fraudulent paperwork,” Fernandez Rundle said.

NBC 6 Investigators first met Shirley Gibson in May when she discovered the lot was sold without her knowledge. She went to the county office to pay her taxes on it but was told the taxes were already paid by Ollie Development.

“Jesus said we should love one another. And I love them. God will do the punishment on them. He can do much more to them in a second that I could do in a lifetime,” Gibson said about the arrests.

Experts and police tell us property owners should check every quarter with the property appraisers website to make sure the paperwork is correct. Miami assistant police chief Armando Aguilar said another sign to check is if the owner is receiving mail intended for another person.

Prosecutors also displayed information on four previous arrests of people accused of elderly fraud. Only one in six cases of scams or crimes targeting seniors is reported, they say.

This story was produced by Phil Prazan for NBC 6 Miami. 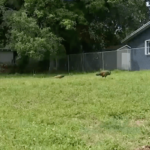 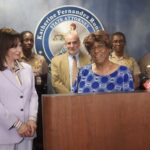