“It is sad that in such a diverse, multi-ethnic community like Miami-Dade County, Covid precautions can trigger such alleged outbursts of ethnic hate. Hate crimes are always meant to demean and intimidate their
intended targets,” said State Attorney Katherine Fernandez Rundle. “I am proud that this victim would not be terrified into silence, allowing my Hate Crimes prosecutors to bring this case before our criminal courts.” 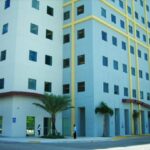